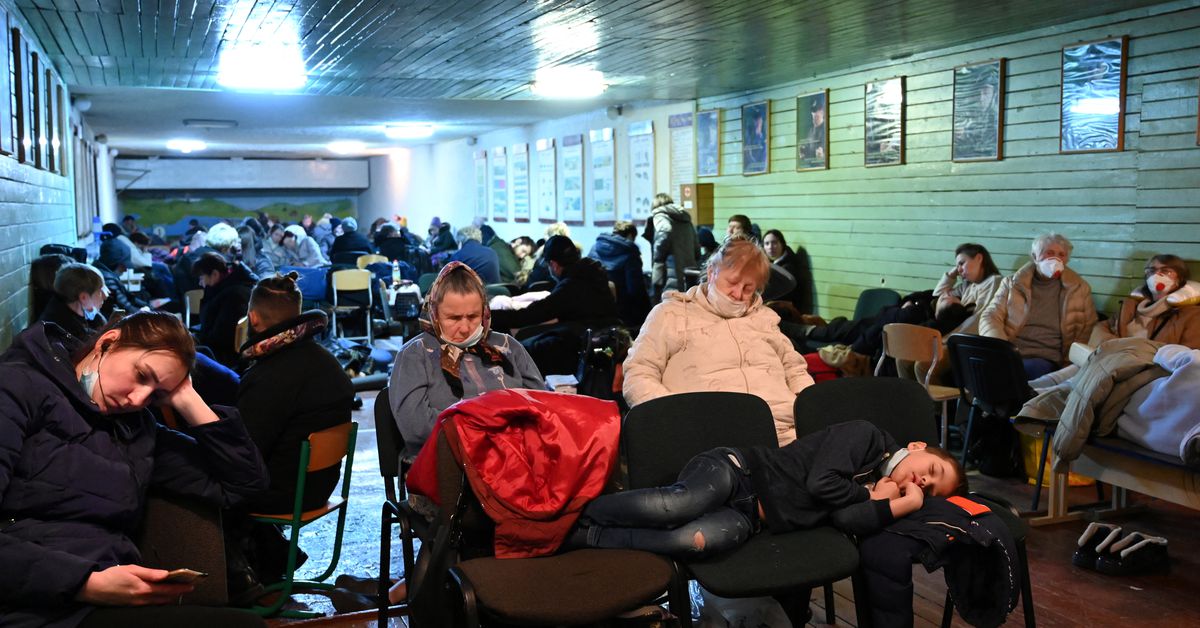 Feb 26 (Reuters) – Here’s what you need to know about the Ukraine crisis right now:

* A defiant president, Volodymyr Zelenskiy, said Kiev remained under Ukrainian control on Saturday as Russian forces renewed their assault, pounding the capital and other towns with artillery and cruise missiles. Read more

* In a sea of ​​blue and yellow flags and banners, protesters around the world showed their support for the Ukrainian people and called on governments to do more to help Kiev, punish Russia and avert wider conflict. Read more

* Germany changed its stance on imposing restrictions on Russia’s access to the SWIFT global interbank payment system, joining other Western powers in backing tougher sanctions aimed at halting the invasion of Ukraine by Russia. Read more

* The EU is in talks on a third package of sanctions against Russia, an EU diplomat told Reuters.

* Ukraine denied suggestions that it refused to negotiate a ceasefire with Russia, but said it was also not ready to accept ultimatums or unacceptable conditions. Read more

* Turkey has not taken the decision to close the Dardanelles and Bosphorus straits to Russian ships, a Turkish official told Reuters. Read more

* The mayor of Kiev extended the curfew in the Ukrainian capital on Saturday. Read more

* The British Ministry of Defense said the Russian advance into Ukraine had temporarily slowed, likely due to logistical problems and heavy resistance. Read more

* Refugees fleeing Russia’s invasion of Ukraine continued to pour in across its western borders on Saturday, with around 100,000 reaching Poland in two days. Read more

* Ukraine’s State Security Service (SBU) denied a report earlier on Saturday that Russian helicopters had landed in the Lviv region, a development that signaled a widening theater of the Moscow invasion. Read more

* Russia will respond to the seizure of money from Russian citizens and businesses abroad by seizing the funds of foreigners and foreign businesses in Russia, the RIA news agency said quoting Dmitry Medvedev, deputy chief of security. Read more

* Ukraine’s Border Guard Service said on Saturday that Russia had closed the northwestern part of the Black Sea to shipping. Read more

* Pope Francis called Ukrainian President Volodymyr Zelenskiy and expressed his “deepest sorrow” for the suffering of the country. Read more

* Twitter is restricted for certain users in Russia, the social media company said in a tweet on Saturday. Read more

* The Kremlin’s official website, kremlin.ru, was down on Saturday, following reports of denial-of-service (DDoS) attacks on various other Russian government websites and state media. Read more

* At least 198 Ukrainians, including three children, were killed as a result of Russia’s invasion of Ukraine, the head of Ukraine’s Health Ministry was quoted by the Interfax news agency as saying. Read more

* France has decided to send defensive military equipment to Ukraine to support the country against the Russian invasion, a French army spokesman said, adding that the question of sending offensive weapons is still open in the study. Read more

* Russian energy giant Gazprom said it was supplying gas through Ukraine in line with demand from European consumers despite the military conflict. Read more

* French maritime police on Saturday seized a ship that authorities suspect belongs to a Russian company targeted by European Union sanctions because of the war in Ukraine. Read more

* Russia on Friday vetoed a draft UN Security Council resolution that would have deplored Moscow’s invasion of Ukraine, while China abstained in the vote. Read more

* China is in a diplomatic scramble to limit backfire while standing alongside a partner with whom it has grown ever closer to the West. Read more

* President Joe Biden instructed the US State Department to release up to $350 million more in weapons from US stockpiles to Ukraine on Friday as it struggles to repel a Russian invasion. Read more

– “We will fight as long as it takes to liberate the country,” Ukrainian President Volodymyr Zelenskiy said in a video message posted on his social media.

– “We are urgently working on how to limit the collateral damage of decoupling SWIFT so that it affects the right people. What we need is a targeted and functional restriction of SWIFT” , German Foreign Minister Annalena Baerbock and Economy Minister Robert Habeck said in a statement.

– “I came to Berlin to shake the conscience of Germany so that it finally decides on really tough sanctions that will influence the decisions of the Kremlin,” Polish Prime Minister Mateusz Morawiecki told reporters ahead of a meeting with the German Chancellor Olaf Scholz in Berlin.

– “In October 2020, we had the privilege of meeting President Zelenskiy and the First Lady to hear their hope and optimism for the future of Ukraine,” British Prince William and his wife Kate said on Twitter. “Today we stand with the President and all the people of Ukraine as they bravely fight for that future.”