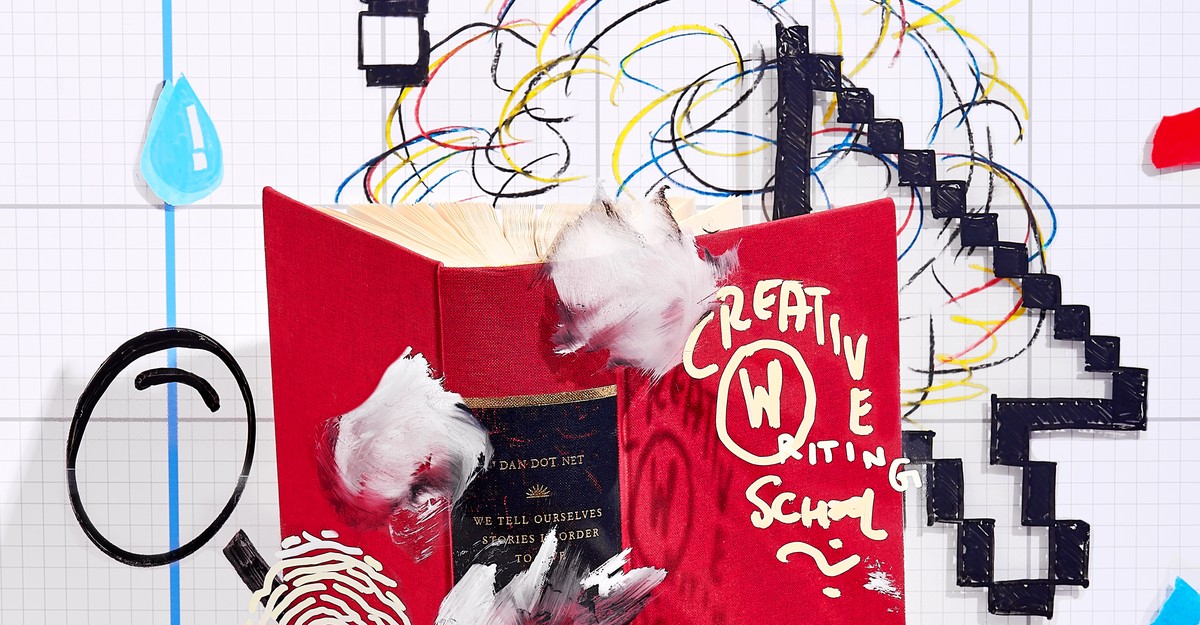 I began as a writer in the early 1990s, before the internet became big. I have existed for a long time without a social media profile, let alone without a website to promote my brand. Then it was around 2009 or so, I was strongly encouraged by my publicist to join the 21st century. I had the opportunity to expose my work to new generations of readers! I thought, Why yes, I would like to do it.

I was teaching at Oberlin College and I hired a student who was double majoring in creative writing and computer science to build me a website. The student showed me how to buy danchaon.com URL, and suddenly I got a domain, a web presence, a border colony named after me. My student helped me paste my accomplishments and accolades into a kind of virtual scrapbook, and he showed me how I could blog my thoughts to the public.

I was determined to create a likable persona and become active on social media and eventually get invited to the hip literary nights I had heard about in Brooklyn. But I never actually did anything. I have never blogged. I never created a likeable character. Accessing my website was always a problem, as I could never remember the dashboard password, and after a while, I more or less gave it up. I have rarely looked at the site more than once a year.

So I didn’t know that I had lost it for some time. It turns out that you don’t just buy a URL. We’re renting it, and my lease had expired. In early summer 2021, I decided to check my website and found that danchaon.com was no longer mine and I couldn’t get it back. My domain belonged to another party.

It’s strange! Why on earth would anyone other than me want to pay for danchaon.com? When I mentioned this to an internet-savvy friend, she shook her head. “It’s a scam,” she said. “They will try to resell it to you at an exorbitant price.”

And so I smartly grabbed danchaon.net. Now what are you going to do with your worthless danchaon.com website, extortionists? I thought and peacefully returned to my usual life in Cleveland – hanging out with my dogs, Ray Bradbury and Shirley Jackson; make soup; looking out my office window and considering the new project that I wasn’t writing. But it turned out that danchaon.com wasn’t done with me yet.

In September, I was still looking out the window when an email arrived from the web designer setting up my new site. “A SERIOUS ISSUE” was the subject line.

She explained that the new owners of danchaon.com have upped their game. Google my name and site is the first result that appears, next to the words DAN CHAON | OFFICIAL WEBSITE OF THE WRITER.

Read: How to invent a person online

This site is amazingly elaborate. Click on it and you’ll see a photo of me looking my best, taken by a professional photographer at a festival in Paris – a photo I don’t own the rights to, but the owners of danchaon.com have cavalierly stolen. The publications page is accurate and the press page has quotes from choice reviews in tablets as if they were wise words. The blog is a replica of the album I created for the original website. Contacts are a little outdated – I have a new publicist and spokesperson. The biography isn’t fake, but it’s written in an odd style – there’s a flavor of Google translation, a feeling that AI might have been involved: “The future master of the word was born June 11, 1964 in Sidney, Nebraska.” Elsewhere he continues: “Dan’s passion for literature began in elementary school when he spent most of his time reading books. A little later, when he was still a high school student , he began to try his hand at writing by sending his short stories to magazines, unfortunately they were all rejected.

It’s strange to have my life interpreted by an extraterrestrial being, especially one whose concept of American letters and fame seems so hopeful and heartbreaking: “Dan Chaon’s most famous books were Among the missing (2001), and You remind me of me (2003). The former was a finalist in the National Book of the Year competition. The latter has been called “one of the best books of the year” by many famous publishers.

These lines appear, oddly, in a section titled “Dan Chaon’s Writing School”. Apparently, my impostors have never heard of an MFA and seem to believe that I invented the idea for the creative writing major: “Early this year, a brilliant idea crossed the mind of Dan Chaon . Being himself an experienced author of world-famous books and stories and a college professor, he came up with the concept of a writers’ school. Soon the idea became a reality and Dan Chaon’s School of Creative Writing at Oberlin College opened.

Not only did my brilliant mind create the Dan Chaon School of Writing; I’ve also designed amazing classrooms: “The process of education can seem similar to regular school. Yet, upon taking a closer look, you can clearly see that it’s different. Students work in small groups instead of classes of twenty or more. The halls are not filled with tables and chairs which usually create a strict atmosphere. Instead, they look more like Victorian-era living rooms, with armchairs and sofas. This allows for a much more comfortable thought process, as students feel much more relaxed. Dan Chaon says it’s easier to create imaginary worlds and stories when you don’t feel the pressure like in a standard school or college.

Although I have not taught at Oberlin College for several years, I must confess that I am charmed by the fantasy of my biographer. I like to imagine a bunch of filthy Oberlin hippies relaxing on Victorian sofas, their thought processes extremely comfortable.

“Ooh my god,” said my sister. “You are charm? Are you crazy? These people are ripping you off! They use your name to extort money from people! »

“But how?” I said. Yes, there were advertisements on the site for an “essay writing service,” but I couldn’t imagine that was particularly profitable. Anyway, I had already tried to trick the owners of the site by sending them a message from a fake email address. “Hello!” I say pretending to be a freshman. “I need essay writing services! I can pay up to $1000! Please help!” But I got no response.

“Maybe it’s more like this kind of weird, friendly trolling,” I said to my sister. Ironically, a number of my books deal with scammers and identity theft. “It sounds like something out of a Dan Chaon novel,” an acquaintance said. Maybe it was a tribute from a black-hat-hacker fan – an honor of sorts.

“It may be,” said my designer from danchaon.net. “But the fact remains that this website is the first thing that appears in Google search. It represents you with incorrect information. Your official website appears way below the fake website.

At first, she hoped there would be an easy solution. I had to file a report with Google, she said, explaining the situation, asking them to list my new URL as my official site and have the old site marked as malicious so it wouldn’t show up in my search results. It was important, she says, to claim my Knowledge Panel, which Google says “are information boxes that appear on Google when you search for entities (people, places, organizations, things) that are in Knowledge Graph”.

But it turned out that, despite the evidence I provided, Google just didn’t believe I was me. “It looks like the website via Search Console that we linked for automatic verification is correct,” a member of the Google Knowledge Panel support team informed me. “We recommend that you verify that you are trying to claim the appropriate knowledge panel that you represent.”

My web designer was exasperated. “No, no,” she said. “These people have no power. They just follow an algorithm. We needed to find someone a little higher up, she thought, someone who was actually empowered to make decisions.

So, we embarked on a months-long quest to find a real living human who worked at Google. I asked my former editor – she and her colleagues are listed on the scam site – and she contacted the lawyers at Penguin Random House, but they didn’t even know how to get into Google’s impenetrable tower.

My web designer and I messaged friends asking if they knew anyone in the business, and a few of my Twitter followers responded. But it seemed Google’s policy was that if you knew someone personally, they weren’t allowed to help you, perhaps to guard against nepotism and unfair partisanship.

Which is probably a good thing, I guess.

Over the next few months, other remedies were suggested. I was told that I could file a Uniform Domain-Name Dispute-Resolution Policy (UDRP) complaint with ICANN (Internet Corporation for Assigned Names and Numbers), but the plaintiff usually has a registered trademark. I could contact the FBI’s IC3 division to report illegal activity on the Internet. If I wanted to get serious, I could send a cease and desist, and if I wanted to get super seriousI could sue the creator of the website and then use the courts to subpoena the web host’s billing/user information to determine the identity of the impostor or imposters.

But all this costs money. Moreover, it is difficult to explain what is actually malicious about danchaon.com. What exactly are they doing that’s illegal?

There is no law against emulation. If I wanted, I could dress to look like you; I could even use your name and borrow a photo from your Facebook page and pretend that your children are my children, your spouse is my spouse, and I could write my fantasies about our daily lives, and what could you do to stop me ? Think about it: is the “you” of your Instagram or Twitter account a tangible thing that you can call property? Is it part of your “me”, like a kidney or a bank account? Now that you’ve let loose on the internet, you’re more or less open source, aren’t you?

Iwrote to them a few times, my imposters, asking if they would consider letting me buy the website. But no one ever answers. I even wonder if they are still there.

Read: How to Fix the Internet

They may have erected this website as a joke or a scam or a tribute. Maybe they did it for no other reason than to hone their web design skills. Maybe they gave it up long ago. Yet it remains, like a monolith of Ozymandias, a site more visited than anything I’ve actually created. Even earlier, while producing this essay, my editor went to find the link to my biography online to paste it into my author line, and she accidentally copied the first thing that appeared: the link from my imposters. It’s a fraudulent monument that may live long after me, the real Dan Chaon… Oh, me! Myself!—cease to exist on this Earth.