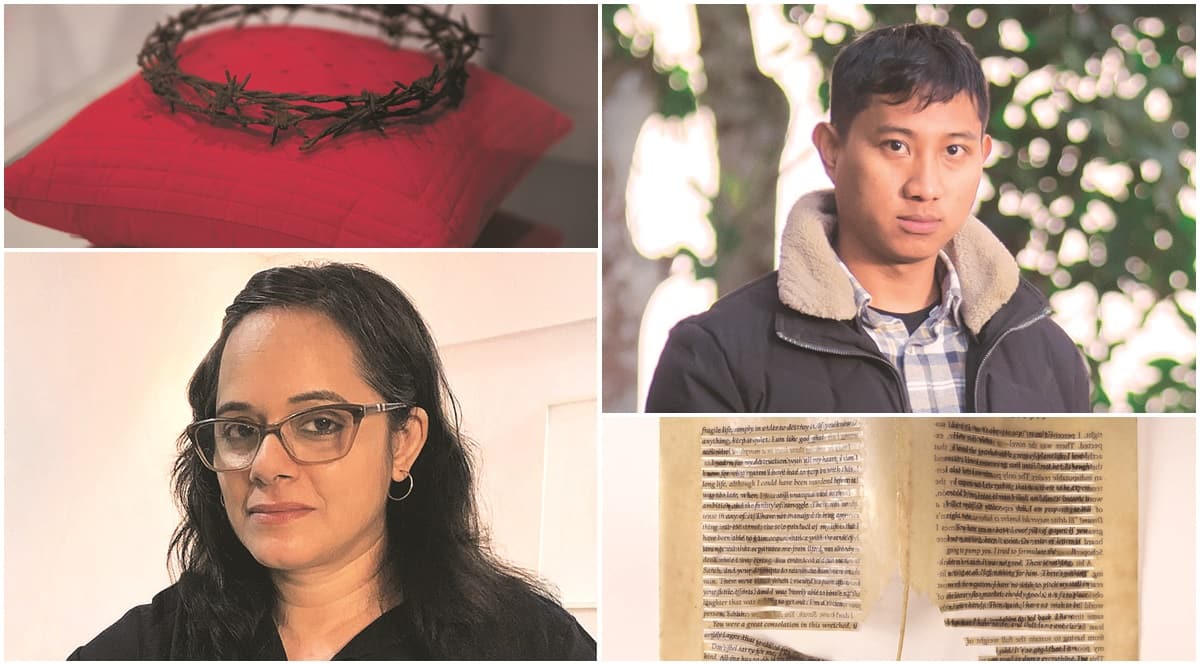 While new practices involve artistic research as part of the process, some artists encourage viewers to read beyond its visual qualities.

Laltlanchhuaha aka Bazik Thlana, a multidisciplinary art practitioner based in New Delhi, uses text to explore themes such as discrimination and ethnic identity. His artistic expressions in the form of texts and symbols are part of the visuals and objects in his research practices, photobooks, blogs and magazines.

Although Thlana’s art does not involve full writing, sometimes the starting point can be a word in her native language Mizo, or English, and poetry. An example of a multimedia art installation where he uses images, maps with text and codes is Rih Dil Titi, a fictional conversation between family members visiting a lake crossing an “international” border. The artworks serve as a portal to an online archive of essays, websites, and other materials and explore the complexities of “Mizo” identity, its colonial heritage, and other histories of human rights violations. rights and isolation of ethnic groups in Mizoram and Myanmar.

Thlana’s use of text in the visual arts is an example of the many ways art has expanded into new forms and practices. Artists are now using text in innovative ways and occupying spaces around art in the form of art criticism, research and curatorial proposals. “It’s true that writing has spread across platforms and institutions, but those platforms have been shaped by the writers themselves. Whether it is oral support, reviews on websites or captions on photo albums and artistic research, writing and its different forms find a prominent place. However, there is still a requirement for a diverse ecosystem and the fact that such forms of writing have proven agility within the art space. It shows how more and more spaces are being opened up for writers in the arts and can lead to openness for cross-genre pollination,” says Delhi-based researcher and writer Arushi Vats.

Vats spoke about the expansion of art into new forms at the online symposium “Staging the Contemporary”, organized by the nonprofit Ishara Art Foundation, India Art Fair and supported by Shiv Nadar University, earlier this year. The symposium aimed to bring together a generation of artists, curators, collectives and writers born since the late 1980s to reflect on the urgencies, methodologies and infrastructures that lay new foundations for cultural practices today. today.

Yet it is clear that these new forms of writing deviate from what has traditionally been seen as a strict discipline of criticism and history, a discipline that can be authoritarian and sometimes hierarchical. “Multi-directional ways of reading and writing have taken new forms not only through the functioning of hyperlinks, but also through expanded participation in virtual discussions, live streaming, podcasts, blogs, etc.” , explains Thlana.

artistic research
While new practices involve artistic research as part of the process, some artists encourage viewers to read beyond its visual qualities. The works of Mumbai-based Mansha Chhatwal focus on the subject of book burning, telling the stories of writers and cultural genocide. As an artist, when Chhatwal works with text, she does not see herself as a writer, but rather as a reader of texts or books. “It is in the processing of text by gestures such as blurring, cutting, piercing, rearranging, etc., that I communicate. This process naturally includes artistic research because the more intimate one is with the subject, the better it translates into the final work. It is research and reading that raises questions about the text,” says Chhatwal.

For example, in his series titled “Brave Pages” at Delhi-based gallery Blueprint 12, Chhatwal creates books that have been burned, banned and censored. The series is inspired by libraries and books that have been attacked and burned due to religious orthodoxy or political strife.

The page of the book serves as a canvas. The act of obscuring, blurring, or cutting off the text acts as a metaphor for the silence of writers, artists, the erasure of a people’s culture and history, or the rearrangement of the text of a way that indicates a writer’s resilience. She uses beeswax as a translucent layer that acts as a metaphor for public candlelight marches of peaceful solidarity and healing. “I have found that this sometimes turns the page into a skin-like appearance, referring to the physical being of the perpetrator himself, for whom persecution is a very personal threat. Burning the pages of a book and working with the ashes are some of the other ways I approach the book and its content,” says Chhatwal.

With the use of the Mizo script, Thlana believes that the rise of social media platforms and the advancement of the web in general has not only enabled wider participation and accessibility, but the role of texts and editing allowed autonomy. practitioners a space for self-reflection and expression that frames new questions, shapes new imaginations and creates multiple dialogues, etc.

One of his curatorial proposals and video performances, titled The Cave that Borrows, uses the word “cave”, which translates in Mizo to “puk”, meaning “to borrow”. These are his expressions of humans who become victims of the materialistic world. Interchangeable meanings from one language to another allow him to carry out different investigations into history, cultural and contemporary issues.

With the Mizo script, Thlana has a love-hate relationship. “The Latin script or alphabets we use now were developed by Christian missionaries in the late 1800s; and the writing system is highly incompatible with the Mizo language, in terms of grammar and tonal variations. I try to bring this writing system as a post-colonial inquiry and help challenge systems that are rigid and stagnant. On the other hand, it also opens up new avenues of engagement where I have actively made the choice not to limit myself to direct translations,” says Thlana.

Various archival performances across cities and disciplines constitute the research work of Delhi-based artist Najrin Islam. Islam’s research based performance and sound arts in 2018-19 with resources in Switzerland won him the Art Writers’ Award from Take on Art in collaboration with Pro Helvetia-Swiss Arts Council. Enriching and diverse research into artists and active performance spaces like the Cabaret Voltaire in Switzerland has become part of the experiences of Islam across cities and disciplines, in addition to the reflection of his writings which are evident in a blog titled Plural Futures that initiates dialogues around space, time and incidents.

Journals of photography’s political and cultural works and critical perspectives on lens-based practices like ASAP Connect—Alternative South Asian Photography have brought new ways to share information and conduct public projects. ASAP is a case study aimed at providing informative and interpretive writing around art through a free platform accessible in a mobile app or website.

ASAP was founded by Alkazi Foundation for the Arts Curator and Publisher Rahaab Allana in February 2021, led by Associate Publisher Senjuti Mukherjee and supported by the Murthy NAYAK Foundation (MNF). The app offers regular posts on contemporary exhibition practices, seminars, publications and grants, podcasts and albums. “A lot of young freelance writers and many graduates have an incredible amount of intellectual and creative input to share. They can drive the app, and it’s a new way to express the impact images have. The paradigm shift is now in information – sharing and production – and we need to think about how to make it accessible to a generation that is constantly staring at a screen,” adds Allana.