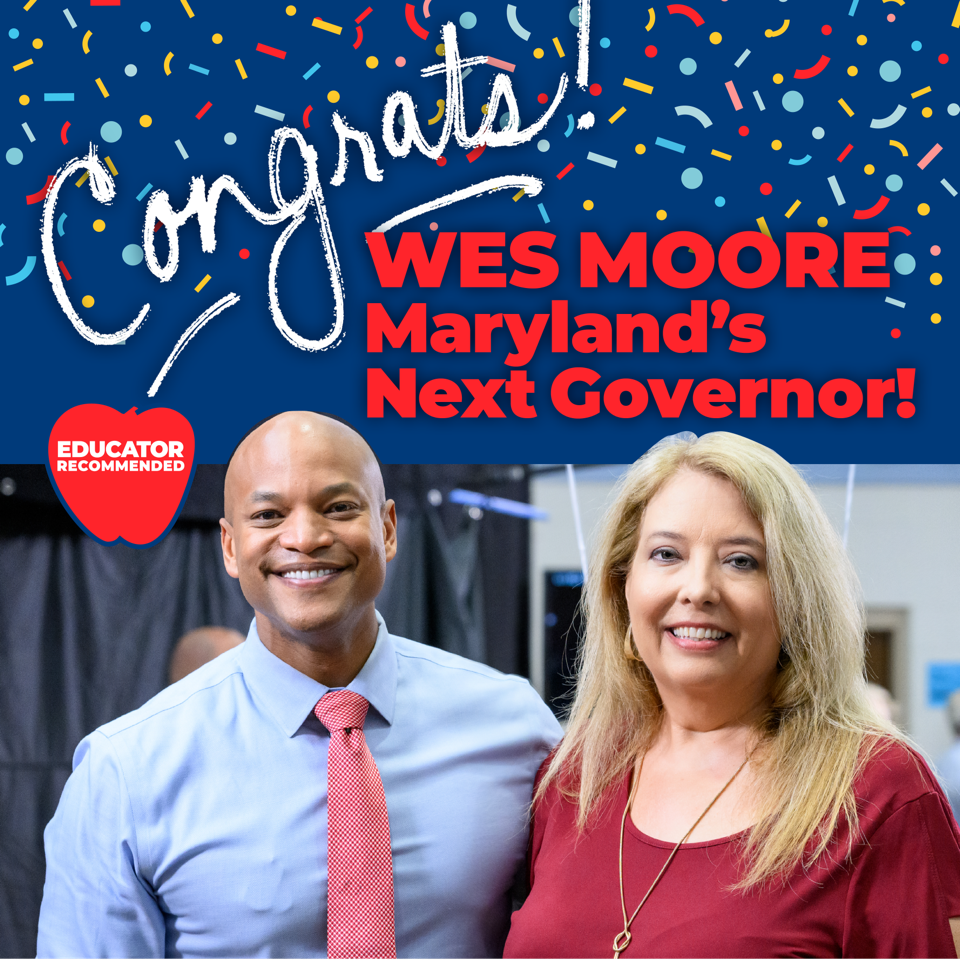 And other legislative updates in this month’s Up the Street

THIS MONTH IN ANNAPOLIS

MSEA members played a pivotal role in the story that unfolded on Election Day when Marylanders elected Wes Moore and Aruna Miller as Governor and Lieutenant Governor, Brooke Lierman as Comptroller and Anthony Brown as Attorney General. The MSEA looks forward to working collaboratively with these key state leaders to support education, empower educators to help shape public education policy, and advance racial and social justice.

MSEA made key early endorsements of Moore, Miller, Lierman and Brown on April 2 at the union’s Spring Representative Assembly which was cited by Maryland Matters as critical to the success of the Moore campaign. MSEA’s inclusive and thorough recommendation process brought together hundreds of educators from across the state who were elected by their colleagues to vote on endorsements. The MSEA then reinforced those endorsements with thousands of volunteers across the state knocking on doors, making calls and distributing nearly 400,000 Apple ballots at the ballot box.

“This is a historic day for Maryland, our students and our schools,” MSEA President Cheryl Bost said in a statement. election night statement. “We are thrilled that Wes Moore, Aruna Miller, Brooke Lierman and Anthony Brown are projected to win their races and lead the fight to ensure no one is left behind and everyone has an equal opportunity to succeed. By eliminating candidates who would have focused on politicizing our schools and attacking the work of dedicated educators, this is a huge victory for our efforts to ensure that every student in every neighborhood has the resources and opportunities to pursue her dreams.

Candidates recommended by educators not only performed well at the top of the ticket; there were also plenty of lower-ballot victories to celebrate. Candidates recommended by educators have won 92% of House of Delegates races called at press time and 90% of Senate races. These win rates will likely continue to increase as more races are called. Educator-backed county executives had a good night, including convincing wins from Calvin Ball and Johnny Olszewski. Mail-in votes lean towards Steuart Pittman, who appears to have a strong chance of emerging victorious once all the votes are tallied. The Frederick County executive race is heading to a photo-finish. Mail-in votes also seem very likely to put NEA and MSEA recommended Congressman David Trone (D-6e) on top in his re-election bid against far-right challenger Neil Parrott.

This year, extremist groups have tried to divide communities by targeting and politicizing school board races in particular. The work of educators has helped defeat extremists participating in many races across the state, paving the way for focused conversations about the needs of our students rather than being sidetracked by national politics and divisions. In some races, however, more extreme candidates have won or could win when all the ballots are counted, threatening to divert conversations about local education from what matters to local schools to national and extreme political agendas. Regardless of the outcome, MSEA members will fight for contracts, policies and legislation to protect and defend marginalized students and educators, the resources students need to pursue their dreams, and an accurate curriculum. and honest.

MSEA has a voice in new administration’s transition team

The Moore-Miller Transition Team has appointed MSEA President Cheryl Bost to the 26-member Transition Steering Committee that will help shape policy recommendations across the state. Along with a handful of other leaders from diverse sectors and backgrounds, Bost will have a unique opportunity to give voice to educators early in the Moore administration.

Announcing their transition team, Moore and Miller reiterated their commitment to establishing an administration that operates transparently and represents and listens to all Marylanders regardless of geographic, racial or social background. Reiterating a campaign mantra, Miller said, “Those closest to the challenge are closest to the solution.”

On Thursday, Bost informed the Blueprint for Maryland’s Future Accountability and Implementation Board (AIB), as it finalizes its comprehensive Blueprint Implementation Plan, that the voices and expertise of educators are critical to implementing the Blueprint. as adopted. The AIB is finalizing its draft implementation plan, which must be submitted to the Governor by December 1. Bost detailed the AIB plan’s failure to include educators in an overhaul of kindergarten readiness assessment, the addition of support for English language learners without designated funding, and the omission of union representation. in several areas where the framework law aimed to give workers a voice. An imprecise implementation of the Master Plan risks losing key voices and missing out on essential goals that the MSEA fought for in the legislation.

Bost agreed with the AIB’s proposal to adjust timelines to help implement the Blueprint in the best possible way. The AIB is considering extending the March 2023 deadline for localities to complete their own draft implementation plans, suggesting they could complete their plans by three phases, the first being due in March. If the change is permitted, district officials will first submit plans for college and career readiness pathways for 11th and 12th graders; for requirements for certified school personnel who have regular and direct contact with students to complete annual student behavioral health training; and to encourage and support teachers, especially those from historically underrepresented populations, to achieve and maintain National Board certification. Districts would have until March 2024 to implement other programs, such as a new professional development system that helps teachers advance in their careers. MSEA intends to have a strong voice in the plans for these programs that directly impact students, educators’ careers, and local bargaining rights.

Maryland Lottery and Gaming recorded a monthly revenue record of $213 million from the state’s six casinos in October. The state received $80 million, of which $58 million went to the Education Trust Fund (ETF). The latest report on sports betting revenue from the state’s seven licensed facilities totaled nearly $31 million in September, with $984,000 to the Blueprint Future Fund.

Apps barely had a chance to open a student loan forgiveness before a coalition of Republican governors sued the Biden administration over the debt relief plan. Applications have remained open, but a Texas federal court ruling this week threatens to shut them down. As the trial progresses, a court order prevents the administration from processing applications, but the website encourages eligible people to apply. The plan is open to individuals who earned less than $125,000 and families who earned less than $250,000 in 2020 or 2021. Pell grant recipients are eligible for up to $20,000 in debt forgiveness, and beneficiaries of other borrowers, excluding federal family education loans (FFEL), are eligible for up to $10,000 in debt forgiveness. Information on the loan forgiveness program is available at studentaid.gov. The pause in federal student loan payments allowed since 2020 has been extended until December 31.

Funding from the Ministry of Education More extracurricular activities

The US Department of Education has informed states that it is handing out an additional $50 million through the Safer Communities Act to fund the 21st Century Community Learning Centers program to address chronic absenteeism. The money is to be used to add or improve extracurricular, extracurricular and summer programs for middle and high school students.