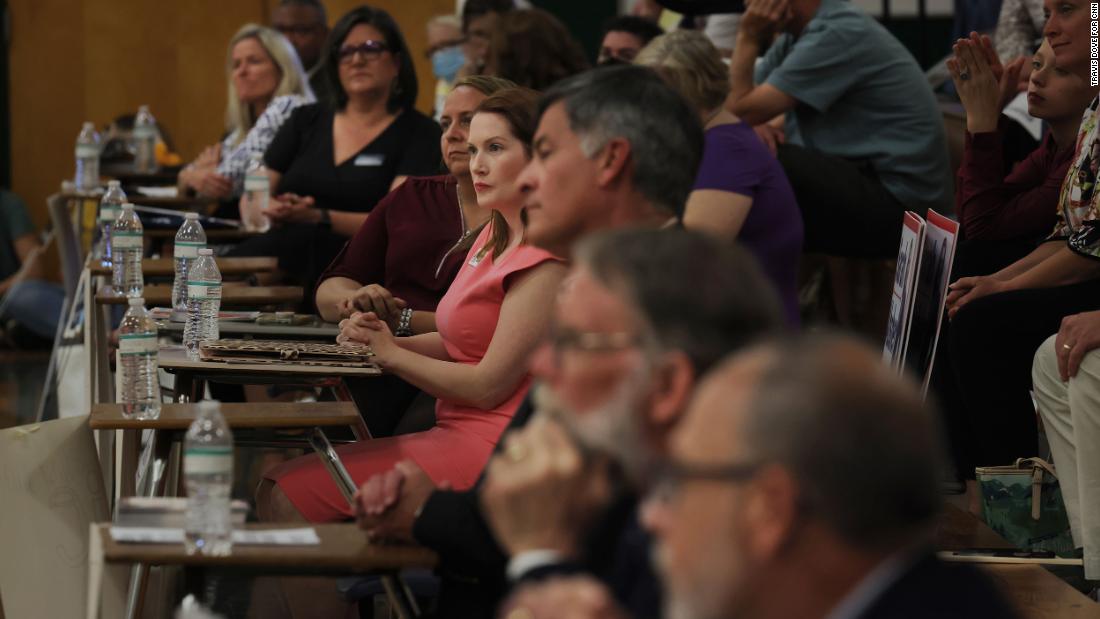 In many North Carolina counties, the May 17 primary offers voters a long list of candidates to choose from for their local school board.

In Forsyth County, 28 candidates are vying for nine school board spots, and in Johnston County, 13 people are on the ballot to fill three vacant seats. In the solidly Democratic County of Durham, a slate of conservatives hopes to grab a majority on the board, and a Wilmington-based political action committee has endorsed four Republicans for the New Hanover County school board.

The state’s largest school system, Wake County, won’t hold school board elections until November, but it’s already expected to be competitive with the board’s nine seats up for election.

“Many school board meetings have become very contentious over the past two years,” she added.

The rise in retirements comes after two years of pandemic-related chaos that has put school boards in the spotlight. In many places, the decision to return to in-person learning and whether or not to mandate masks rests with school board members who are typically elected officials and unpaid civil servants.
Today in North Carolina and across the country, some parents are expressing concern over issues such as book bans and critical race theory.

Sarah Absher said she never thought about running for school board or elected office before the pandemic. But things changed once her son was home learning remotely and she felt she wasn’t hearing her parents. current members of the District Board of Directors. Now she’s running in the Republican primary for a seat on the Winston-Salem/Forsyth County School Board.

“Many have advised me not to talk about the politics of Covid. They say people are ready to move on,” she told the crowd at a student-organized candidate forum at the West Forsyth High School on May 11.

“But before we sweep the last two years under the rug, we need to acknowledge the leaders responsible for those policies that failed you,” she said, adding, “You had to exercise outside with a mask on. Some of you have missed proms and other important life events. Many of you, including my son, have experienced learning loss from remote learning.”

All nine Winston-Salem/Forsyth County School Board seats are up for grabs this year. The school system is one of the largest in the state, consisting of 81 schools.

The majority of applicants are parents or former educators. Seven Republicans, four Democrats and one Libertarian are running in the May 17 primary for the three seats on the board.

But the list of candidates does not stop there. Five Democrats are vying for two seats in District 1, which represents the urban core of Winston-Salem. Ten Republicans have filed in the primary for the four seats representing the more rural District 2, and a Democrat is expected to be on the ballot for District 2 in November.

Eighteen of the candidates spoke about their priorities at the May 11 forum. They included a range of issues, including pandemic-related learning loss, a staffing shortage, board transparency, preparing students for college and post-graduation careers, opposition to critical race theory and the defense of parental rights.

Democrat Sabrina Coone-Godfrey is another parent running for a seat on the general school board. A longtime volunteer in the school district, Coone-Godfrey said she thinks it’s time to take the focus off decisions made during the pandemic.

“We have people running who are still very much stuck in the pandemic train. We have to get past that. We have so many other issues in our district,” she said, adding that focusing on recruiting and teacher retention would be one of her top priorities if elected.

Politics seeps into school board races

Both the Democratic and Republican parties in North Carolina are paying a lot of attention to school board races this year.

Republicans are hoping education could become a winning issue for the party in up-and-down polling races, like Virginia Gov. Glenn Youngkin, who was elected last year after making parental choices a centerpiece of his campaign.

“Education is a priority for us at every level,” North Carolina GOP Chairman Michael Whatley said.

He sees new Republican candidates running for school boards in traditionally blue urban areas, as well as in Republican counties where Democrats currently control the school board.

“The pandemic has opened the eyes of many parents who have been able to see exactly what the classroom curriculum was like while their children were learning online at home,” Whatley said.

But pandemic concerns aren’t the only ones being raised, especially now that kids are back in school and mask mandates have been lifted. As in other places across the country, contentious topics about how gender and race-related curricula are taught in schools — as well as what related books are available and assigned to students — are also popping up during meetings. school board meetings.

Earlier this year, the North Carolina Values ​​Coalition, a Christian nonprofit organization, sponsored two school board “boot camps” attended by more than 80 local candidates. The events aimed to train school board candidates on how to campaign as well as how to “combat harmful curriculum content,” citing gender theory; critical race theory; social-emotional learning; and diversity, equity and inclusion initiatives in public schools, according to the group website.

“What we’ve seen this year is parents coming forward to school boards because they realize that if they don’t, schools will continue to indoctrinate their children,” said Tami Fitzgerald, North Carolina. Executive Director of the Values ​​Coalition.

North Carolina Democratic Party Chair Bobbie Richardson said her party is trying to keep politics out of school board races.

“As Republicans try to inject politics into the classroom, Democrats in North Carolina will continue to fight for the best possible education for our students,” Richardson said.

“The Democratic candidates running for the statewide school board understand that we need everyone working together – parents, teachers and administrators – to create safe, healthy and inspiring schools where our students can reach their full potential. “, she added.