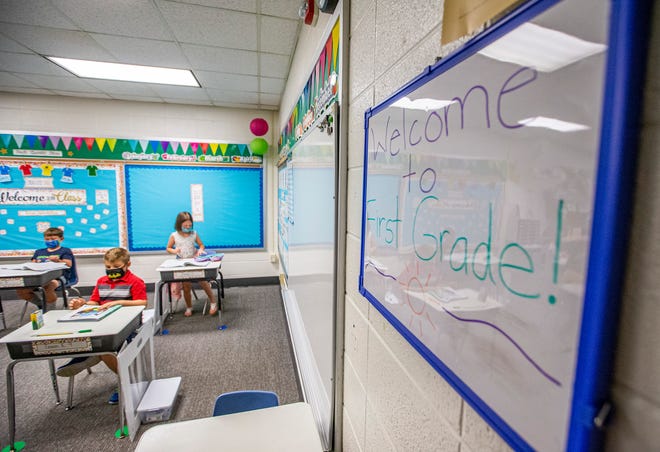 Technical difficulties have caused confusion this week among educators in northern Indiana looking to upload data and educate families about coronavirus cases through the state’s COVID-19 dashboard.

The dashboard, updated weekly on Monday, shows the number of new cases and the total number of COVID-19 cases among students, teachers and staff, as reported to the state .

Representatives from schools in South Bend, Mishawaka and Penn-Harris-Madison said they encountered difficulties ranging from issues connecting to the state portal to submitted data not showing up on the publicly accessible dashboard.

Some say their schools have been publicly mislabeled as not having reported a case this school year when they attempted to upload data just last week. Others say they have encountered technical difficulties dating back to the last school year.

The state made at least one change to its data this week.

After an investigation by The Tribune on Tuesday, the state adjusted the numbers and added a notice to its dashboard.

“Due to technical difficulties on today’s school dashboard, some schools had cases assigned to the wrong school year,” the post read. “The problem has been corrected.”

The Tribune has repeatedly requested in recent days to speak with a representative of the state’s health department about its dashboard and has been asked to email questions instead.

“Schools are required to report confirmed cases to local and state health departments within 24 hours,” a department spokeswoman wrote in an email last week. “Schools have received information on how to report to the state portal, and we continue to communicate with schools on the need to report.”

Participation required in the state dashboard

The state expanded its school coronavirus reporting portal and public dashboard last year. At the time, schools’ participation in the state portal was voluntary.

This school year, however, state officials say it is the tool they will use to ensure schools meet their mandatory communicable disease reporting requirements for COVID-19 cases. .

At a press conference in late August, State Health Commissioner Dr Kris Box announced that a new feature would be added to the dashboard allowing users to switch between school years 2020-21 and 2021-22.

At the same press conference, she drew attention to a large number of schools – over 1,200 – which she said had not yet reported cases to the state in the New Year. .

“It’s hard to know exactly what happens when schools are unwilling to report cases,” Box said at the time. “We are working closely with schools and discussing with the Ministry of Education future actions or support that could be given to schools that are doing the right thing here.”

Do not report:State health officials say 1,200 schools have not shared COVID-19 data this school year

In the weeks since the new feature was introduced, the number of schools listed as non-reporting fell to 729 as of noon Wednesday, according to the state’s dashboard.

The dashboard shows that 1,639 schools have reported one or more cases this school year and no school has reported not having reported any cases.

However, several administrators and spokespersons representing schools labeled as not reporting told The Tribune that their teams attempted to upload information to the state portal as late as last Friday.

The information currently available on the scoreboard includes results submitted before midnight last Friday, according to the ISDH. The dashboard was last updated on Tuesday due to Labor Day.

These apparent problems in the state system make it difficult to understand exactly which schools and how many failed in the first few weeks of this year to meet their reporting requirements.

More than 30 schools in St. Joseph County are currently labeled as “unreported” this school year and at least a dozen schools in the county are described as such in the 2020-21 year.

Five schools in the Penn-Harris-Madison School District appear on the state’s scorecard as “unreported.”

District spokeswoman Lucha Ramey said two of those schools – Elsie Rogers and Mary Frank Elementary Schools – had no positive cases before the latest dashboard update and leaders of these schools believed that they did not need to submit to the state portal before their first cases.

“We have nothing left”:Mishawaka principals defend masks amid COVID-19 outbreak

Mishawaka Schools spokeswoman Jennifer Smith said administrators in her district could see from the backend of the state portal that they had not reported any cases at her Hums Elementary School last week. Buzzing, however, also appears as “unreported”.

All schools in South Bend Community School Corp. – where four in-person schools and the district’s virtual school were described as “unreported” – have shared their data with the state, Deputy Superintendent Brandon White said.

Two of those schools – LaSalle Academy and McKinley Elementary – have had no cases so far this school year and two more – Monroe and Muessel Elementary Schools – have had a case, White said.

The district does not plan to report cases for its South Bend virtual school, White said, unless students participate in extracurricular activities meeting in person at other schools in the district. In this case, those reports will be included in the total for the school where the after-school program was offered, White said.

Some schools keep their own dashboards

Several principals told The Tribune that they have contacted the state to ask for help in resolving these technical difficulties.

Some schools keep their own data and publish it in more detailed localized dashboards and kept on their websites.

Mishawaka, for example, shares daily the number of students and staff quarantined in each of its schools as well as the number of positive cases across the district each week.

South Bend, however, changed this school year to exclusively use the state dashboard to streamline reporting of school-specific data.

Last year, the district maintained a dashboard showing the number of cases by school as well as infection rates for students and staff. But, with the state and district dashboards occasionally updated on different days last year, families could find conflicting data about cases in their students’ schools.

“We just wanted to make sure that the information we were releasing was not inconsistent with state data,” White said.

He said relying solely on the state dashboard also eased the burden of reporting data in several places.

While still working on the technical difficulties of the dashboard reports, White said individual families would be contacted directly if their student is identified as close contact with a positive case.

“We always have internal controls to make sure schools are reporting adequately and we continue to monitor the numbers and make decisions based on the data,” White said.