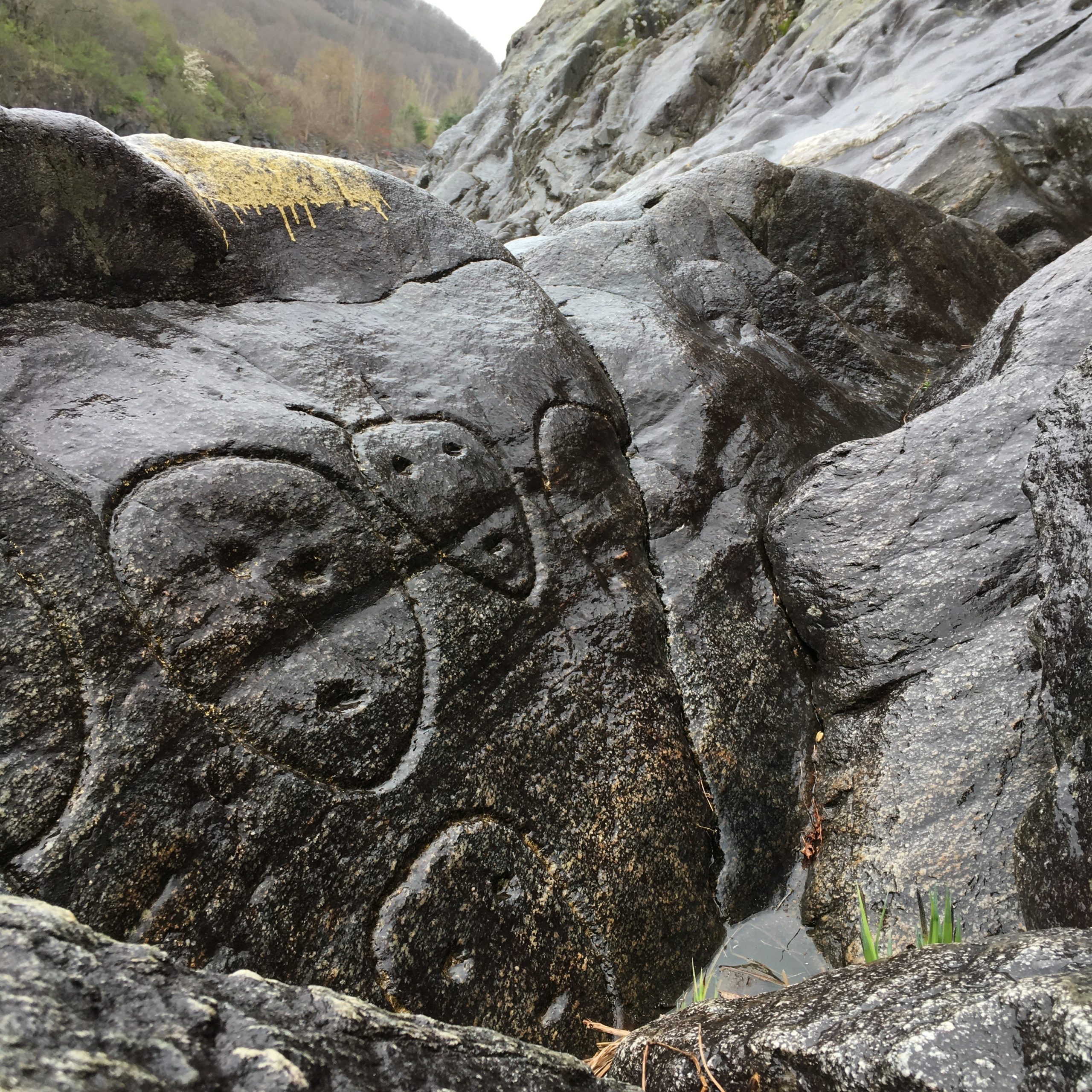 A federal grant will support the study of a petroglyph site at Bellows Falls by a local indigenous group, the Elnu Abenaki.

Those involved say this is just the first step in promoting education about local Native American history in the Connecticut River Valley.

Two sets of sculptures depict more than a dozen minimalist faces, some featuring what look like horns or antennae. First discovered by white settlers in the late 19th century, the petroglyphs are thought to have been carved by members of the Abenaki tribe several hundred to 3,000 years ago, archaeologists say.

The town of Rockingham, which includes the village of Bellows Falls, in conjunction with the Elnu Abenaki, received a National Park Service Underrepresented Communities Grant of nearly $37,000 to support two years of research around the site, starting this fall.

Roger Longtoe Sheehan, chief of the Elnu Abenaki, said he hopes the project will raise awareness of the Abenaki people and the landscape they traditionally inhabited.

“People in Bellows Falls, most people there weren’t quite sure why this stuff is there. Why are these pictograms there? Why are there graves there? he said.

According to Longtoe Sheehan, the Great Falls was a popular fishing spot and underground spirits were believed to live beneath the turbulent waters.

The Elnu received state recognition in 2011 and are one of four state-recognized Abenaki groups.

Recently, these groups have come under intense scrutiny. At an event at the University of Vermont in late April, members of the Odanak First Nation, an Abenaki reservation in Quebec, questioned the legitimacy of the Abenakis of Vermont.

To Holschuh – a spokesperson for Elnu – who receives the grant indicates that the Abenakis of Vermont correspond to the target of the funding: underrepresented communities.

According to Holschuh, the study will examine the petroglyphs in context, linking other significant Indigenous sites in the Connecticut River Valley.

Titled “Kchi Pontegok” (pronounced kit-SEE-POHN-tuh guk), which means “at the Great Falls” in the Western Abenaki language, the project will study the two petroglyph panels near the Great Falls along the Connecticut River downstream from Vilas Pont.

A similar petroglyph site is located downstream where the Connecticut and West rivers meet in Brattleboro, Golec said. She hopes to study the Bellows Falls site in the context of Brattleboro.

Throughout New England, similar petroglyphs are extremely rare, said Vermont state archaeologist Jess Robinson. According to Robinson, the Vermont carvings could be up to 3,000 years old, but are likely more recent. Because scientists cannot date the carbon etchings and many sites have been re-engraved over the years, it is difficult to date the images accurately, he said.

At Bellows Falls, the petroglyph project will allow for both archaeological study and cultural investigation.

According to Golec, the archaeologist who helped lead the study, part of what makes the project unique is the leading role the Elnu will play in historical research and collecting relevant oral histories.

“We want the Indigenous perspective and Indigenous peoples themselves to be at the forefront of this research,” she said.

Diana Jones, project coordinator and member of the Elnu Abenaki, said the work will result in changes to Bellows Falls Island’s listing in the National Register of Historic Places, which may result in a separate listing for petroglyphs.

Jones, who is a member of the Rockingham Planning Commission, explained that the study of the petroglyphs is part of wider plans for collaboration between the city government and the Elnu.

A recently formed committee that includes petroglyph project leaders plans to open an Abenaki cultural center in an existing building near the Bellows Falls site, Jones said. The group requested $10,000 in US federal Rescue Plan Act funding for the initiative.

And as the Rockingham Planning Commission rewrites its city plan this year, it plans to add language that explicitly supports the local Indigenous community, whether through public education programs, protecting important archaeological sites. or maintaining a working relationship with the Elnu.

“We are just a state-recognized tribe. But being federally recognized as an underrepresented community, even in the guise of just a grant, is so important,” she added.

Jacques Watso, an Odanak councillor, expressed concern that the Elnu would use the grant to support a “rewritten history” of the Abenakis of Vermont.

“They set up the narrative in Vermont. So we are just starting to talk about our ancestral territories,” he said.

“Vermonters,” Watso added, should be able to interview state-recognized tribes “without fear of being called racists simply for asking questions.”

The Abenakis of Odanak were not allowed to participate in the statehood process, Watso said. The Abenakis of Vermont have used the US-Canada border — a colonial border — to thwart dialogue, he said.

Holschuh, the Elnu leader of the petroglyph project, highlighted a larger goal of learning more about the Great Falls.

“Anyone who wants to participate is welcome. This is not an exclusive, exclusive business,” he said.

Did you know that VTDigger is a non-profit organization?

Our journalism is made possible by donations from our members. If you appreciate what we do, please contribute and help keep this vital resource accessible to everyone.